Sometimes things don’t quite come together. Tonight was one of those nights… I had plans for this blog post, but Jdubs is not cooperating so I had to redirect. But now maybe it’s going to be something more awesome than I had originally planned.

I looked through my random photographs and there are several I haven’t been able to use elsewhere. So I decided to write this post as random awesomeness in pictures.

A few days ago United Supermarkets had a sale on berries. I LOVE berries, and since it was cold, I made oatmeal and berry awesome in a bowl. And I have serious coffee every day. This is pressed coffee. The French version of Cowboy Coffee; it’s not for sissies.

Supper tonight. I made vegetable soup and chicken salad from a leftover roast chicken. The bread is the awesome country French bread we got at Central Market on Sunday. Oh and those are the little garden tomatoes I picked when they were still green, just before the killing frost. If you leave them out, they will ripen.

I almost peed my pants when I saw this (at Central Market on Sunday). You know how I love Scharffen Berger chocolate. Well here is a giant block of San Francisco chocolaty awesomeness!

The UPS man left a great big cat playhouse on the front porch. (That’s what I told the cat, anyway). Awesomeness in a cat toy.

Who doesn’t love Sock Monkey? This hat is random awesomeness!

I’ve been shopping around our downtown and online and at Walmart in search of gift greatness. And I’ve found a few items I love.

Electric kettle – this rocks. The best $11 I spent at a hardware store. I use it every day sometimes more. I make pressed coffee in the morning and in the evenings I have a little hot cocoa or a decaf coffee. This kettle works great – heats up very quickly, faster than the microwave. 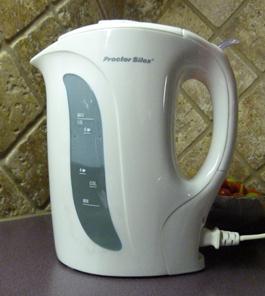 Starbucks Via is a great stocking stuffer. And it goes well with the electric kettle … It is great for that single cup.

Subscriptions to awesome magazines. I love Cook’s Illustrated. (OK Williams-Sonoma isn’t a magazine, but the stuff in it is way cool).

These are awesome little gifts for your kids’ teachers or work colleagues. They are little covers for travel packages of tissues. Boaz has them in our little town. They even gave me three little gift sacks to package all my teacher nick-knack gifts together.