The weather is a curious thing … this is the second “haboob” [aka dust storm] in about six months. I don’t really ever recall having dust storms here in Young County as a kid. West Texas was famous for them and I became familiar with the dust storms after living in Lubbock, Texas, during college. The photo below was taken from my alley with the camera pointed at the sun in the late afternoon.

The hydroelectric plant [aka the fairy castle] on one of our lakes is a favorite photo subject of mine. Today it was eerie with the camera pointed at the sun with the haze of the dust blocking out most of the sunlight.

The powerful cold front has moved through … the temps dropped 30 degrees and the wind died down. Earlier it was sustained at 27 mph out of the west. In the “so far today” section the wind speed was clocked at 44 mph. I swear is gusted faster than that. Now we need rain to “wash” the air. 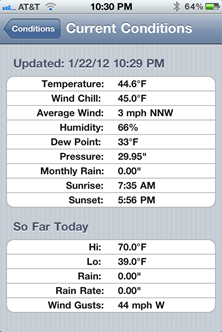