As a quick aside from our beer chronicles, we went ahead and purchased the ingredients for a Double Bock (or a “Doppel Bock” as the purist say) the last time we were in the brewstore. This is made with DARK malts and dark roasted grains. The recipe is meant to be a clone of the delicious Paulaner Salvator Doppel. I’ll add more pictures down the road at some point, but this actually is worth a quick post just to tell the story of our first ‘big’ beer. We wanted one that would be ready in a couple months and a fun one. This one takes 6 months to finish off. That sounds long to the novice, but the masters will brew then cask in bourbon oak casks for a year at a time to mellow their wort.

We’re not waiting that long, at least not at first when we are still learning how to do this. Here’s the fun part, though….when we were bottling the bitter ale, we realized that we LEFT THE SUGAR OUT OF THE DOUBLE BOCK. That’s an issue. Without enough sugar, the yeasts can create enough alcohol and the flavor will be really weak. After some deliberation and a commercial beer or two, we decided to go ahead and mix in the sugar AFTER the initial fermentation to restart the yeasts for another fermentation before we bottled. The process would last 3days to a week until the sugar was devoured.

Now…was this a smart idea? Probably not. The risk of picking up mold spores or dust or anything bad in the transfer is really not something we want to do. However, spending 6 months on a beer that ends up tasting like something they sell in Oklahoma where they limit the beer abv to 3.9% is not something we’d rather do. So we mixed up the sugar with some of the wort we siphoned out of the carboy then funneled it back in. After a full week, the bubbles stopped and the beer was ready to bottle. We left it in an extra week. Why? Well, we were busy. That’s probably not that smart either, but hey…we are new to this. 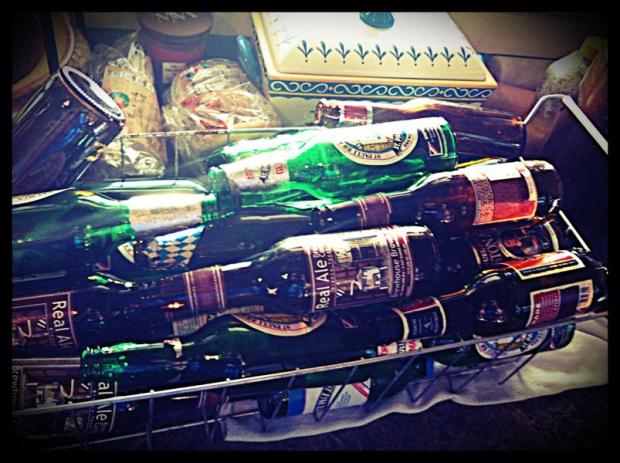 The glass carboy with the delicious double bock waiting inside. Notice the ring of yeast around the top. That’s where the wort was when we first put it in. The yeast ate it down that far. 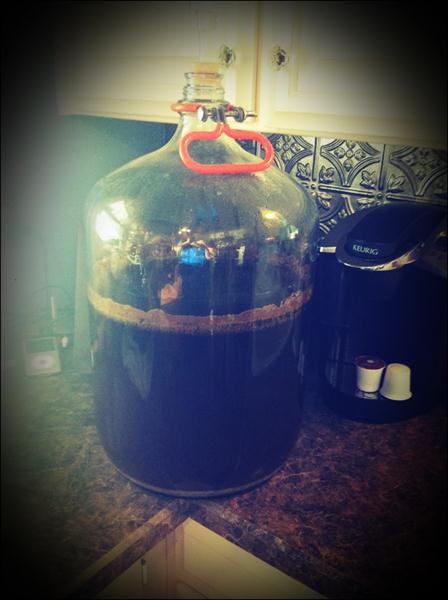 The color is like cappuccino. Dark brown with a foamy crema on top. 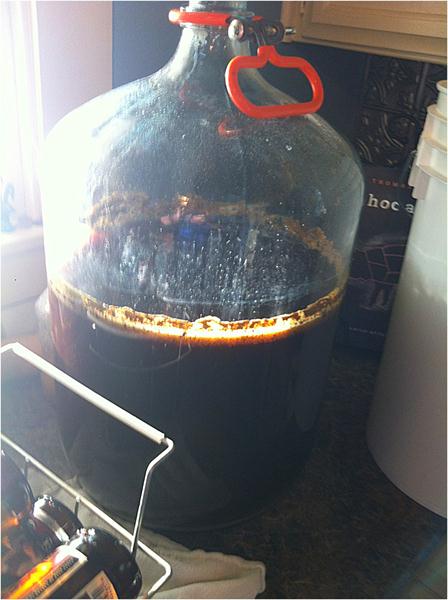 I’m fast forwarding a bit, but this is what the carboy looks like after it’s drained. The bottom looks like saturated river bottom sand. Doesn’t smell like it, though…this smells like warm yeasty bread with a PUNGENT alcohol punch to it. Smells incredible. 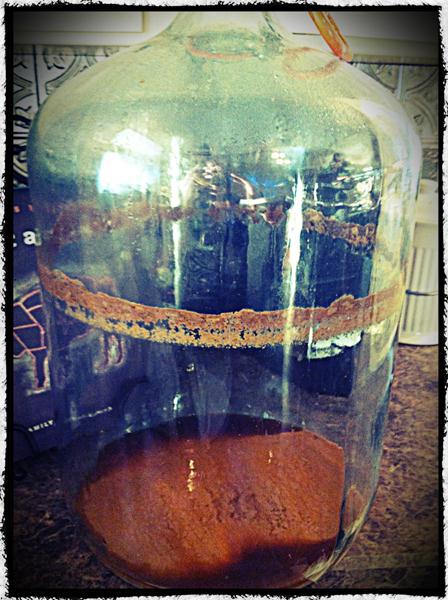 This is the brew in the secondary fermenter that we are using for bottling b/c it’s the only bucket we have with a spigot. Forgive me for the heaven photo effect, but it’s the only one I could find that highlighted the brew and the crema without picking up any other colors. The texture is similar to a dark soy sauce. It’s a sweet flavor that’s definitely young and needs some time in the bottle. In a pinch, though, you could drink this right now. It would need to be in a pinch, though, because this needs some bottle lovin’ for a few months. 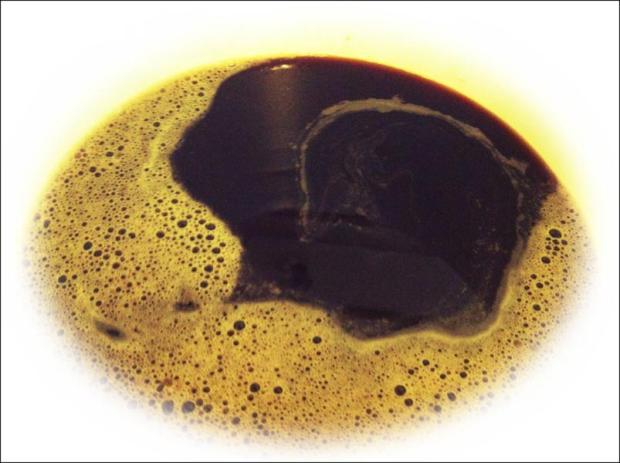 We used a couple oversized bottles that Runnin’ Buddy has been saving for a few years in case he ever picked up homebrewing. It’s almost destiny. 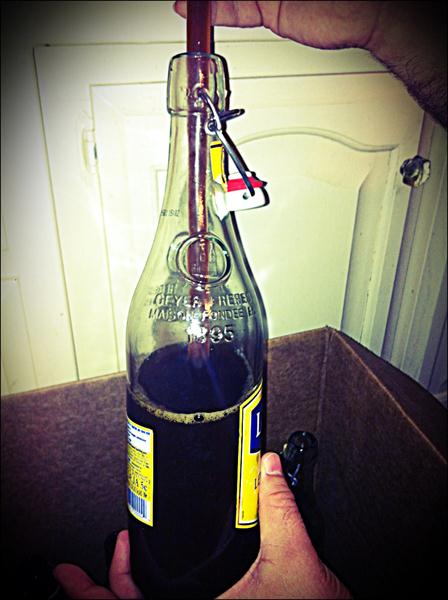 Some random shots of the bottles, filled with the sweet nectar of the double bock. 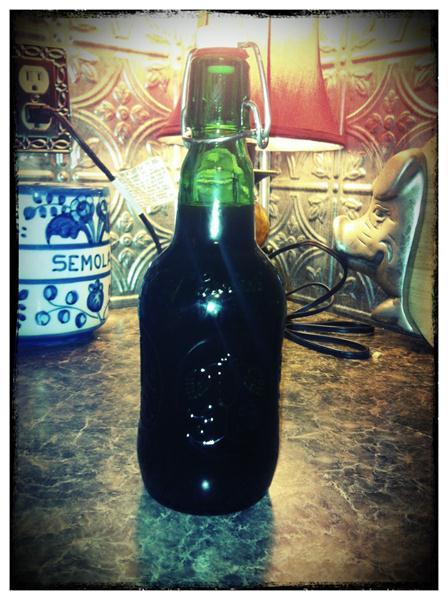 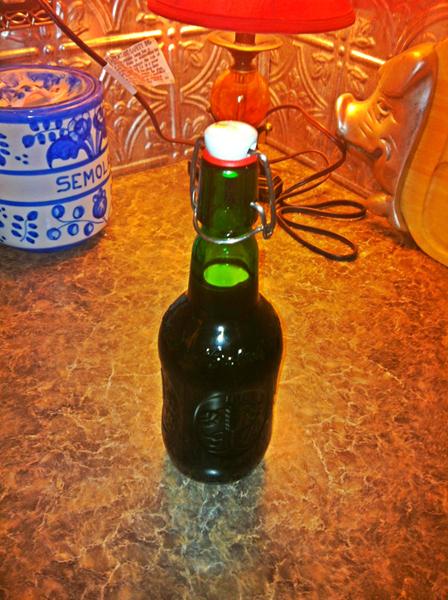 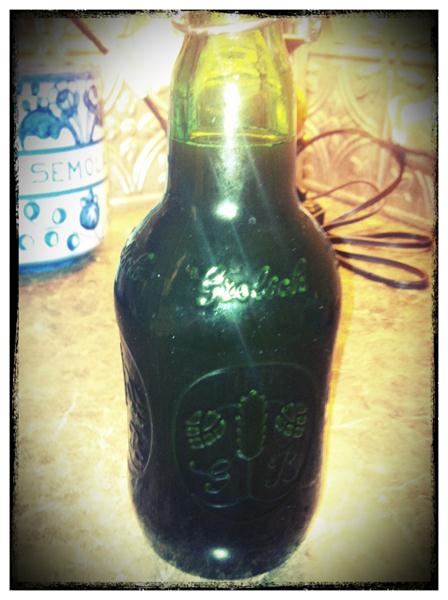 And there we have it…forty bottles of our double bock that we lovingly named Big Jim’s Double Dark. Check back in August when we get to open these. 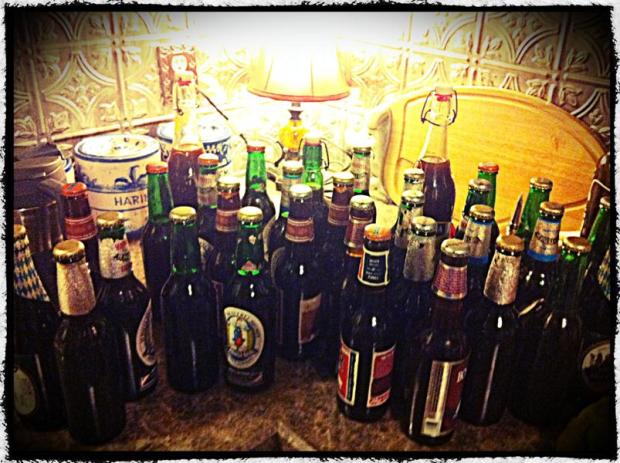